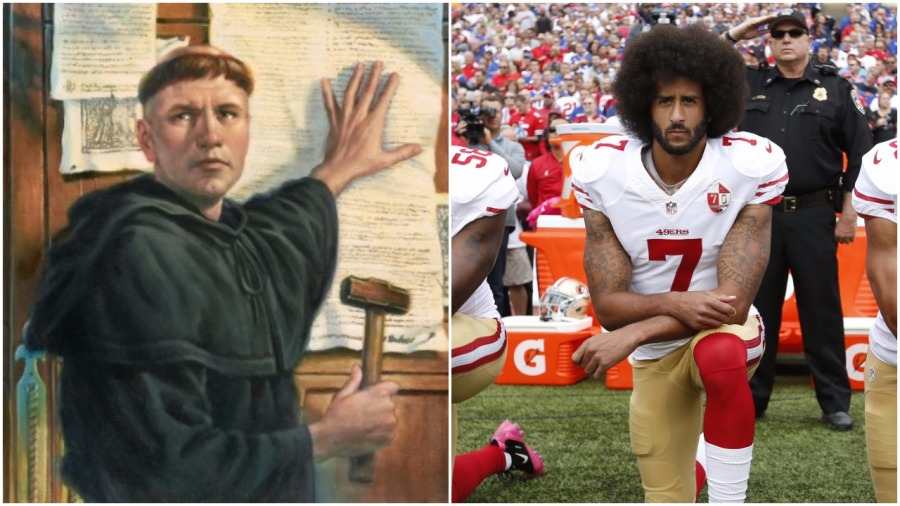 In Dr. Timothy Wengert’s (Professor of Lutheran History and the Lutheran Confessions) introduction and commentary to Martin Luther’s 95 Theses, he writes,

Luther clearly composed the Ninety-Five Theses as theses for debate. Yet, when compared to other theses that he and other professors were composing at around the same time, the Ninety-Five Theses contain some turns that were decidedly not intended for classroom debate using logic and syllogisms. They have far more rhetorical flare than one finds in other university theses, both before and after 1517.[i]

As is becoming more commonly known, Luther’s writing and posting of the Theses was not uncommon among professors. In fact, at this time each year it was common for any professor in Wittenberg to post their theses onto the doors of the Castle Church in order to engage in debate in that academic setting. This was a common practice – an academic practice.[ii]

However, what Wengert’s words above can help us to understand is that Luther was using this floor for debate as a jumping-off point to a much larger conversation. His goal was not to engage in one debate and to end the conversation there. His words in the Ninety-Five Theses were inflammatory. They were divisive. They were shocking. They were an act of protest.

Whether Luther intended to or not, his actions started the Protestant Reformation. He did not want to start a new church, but he did want to change and reform the system of the church. It was a system that was designed to profit off of those with no privilege and who were oppressed.

If you’re thinking this is a leap, here are some of the ways that the system of that time was taking advantage of its subjects:

One of the Catholic church’s practices that Luther took particular issue with and drove him to write his Ninety-Five Theses was the sale of indulgences. When we think about indulgences in modern times, we often think about them merely as a payment for your sins – that people would just have to pay money and then a priest would grant them absolution and for any sin that the had committed and then everything was solved. However, the sale and use of indulgences was far more cruel and costly.

Through this system, a sin could be paid for through prayer, fasting, or almsgiving. According to Tim Wengert, depending on the sin, “saying a prayer in a particular chapel dedicated to a saint, by giving money to a particular cause, or by going on a pilgrimage to a particular shrine, a person could, because of the church’s indulgence, satisfy more of the temporal punishment than otherwise would be the case.”[iii]

So, one could pay towards the building of St. Peter’s Basilica or, as Wengert writes, one could “participate in the Crusade to ‘free’ Jerusalem and other holy sites from the ‘infadels’ (i.e., adherents of Islam), Pope Urban II (c. 1042-1099) proclaimed that those who participated in a crusade for religious reasons would receive ‘plenary’ (full) indulgence, eliminating all satisfaction for all sins committed up until that time.”[iv]

The understanding of indulgences continued to be expanded overtime, from being able to contribute to the building of churches named after Apostles, to the purchasing of relics and placing them in churches (i.e. Elector Fredrick III, in the early sixteenth century whose placement of relics in the Castle Church of Wittenberg has a total indulgence associated with their viewing of over 100,000 years.)[v]

Wengert writes, “In 1476 Pope Sixtus IV (1414-1484), when proclaiming a plenary indulgence to help rebuild the cathedral church of St. Peter in Saintes, France, declared for the first time that plenary indulgences were also valid for souls in purgatory. Thus, one could now purchase an indulgence not only for one’s own soul but also for one’s dear, departed loved ones already suffering in purgatory.”[vi]

Martin Luther saw how this system was contrary to the Gospel. We know this by now. As a Lutheran, Protestant, (or even just a Christian), we better know this by now. Salvation and grace come not through any doing of our own – not our own works, payments, or merit. Ephesians 2:8-10 says, “8 For by grace you have been saved through faith, and this is not your own doing; it is the gift of God— 9 not the result of works, so that no one may boast. 10 For we are what he has made us, created in Christ Jesus for good works, which God prepared beforehand to be our way of life.”

And so, Martin Luther protested. And Martin Luther started the “Protest”-ant Reformation by writing, posting, and debating these Ninety-Five Theses that were subversive, political, persuasive, and provocative in order to begin a conversation that could potentially create change and would help those who were suffering.

For example (taken from the Ninety-Five Theses):

I do not feel that I need to go further in explaining that these early actions taken by Luther were not merely an academic practice but were purposefully enacted to drive the debate of the sale of indulgences. Luther was not interested in just talk but was demanding change. And ultimately to reform the church and return to the central message of loving one’s neighbor and not perpetuating a system that was directly antithetical to Christ’s work.

So, why bring this up at this time?

What amazes me at this time and in this century is that many Lutheran’s have somehow forgotten this side of Luther. Or I should say, we conveniently forget his protests unless we are we are feeling proud of ourselves and thanking Luther for having broken away from the Catholic church.

Luther protested the church in order to create reform. Those actions were divisive, provocative, and were an act of treason. To discount the authority of the Papacy was treasonous and punishable by death. And yet, we praise him for his actions. We give him all glory, laud, and honor and proclaim his words (that may only be attributed to him and he may never have actually said) until our dying day, “Here I stand. I can do no other.”

But, if we see an NFL football player take a knee during the national anthem (which is a sign of protest and protected by constitutional right) in order to bring awareness to injustices that oppress and kill people of color every day in this country, then we crucify them. We crucify them under the guise of excuses like, “They are disrespecting our flag.” “They hate America.” “They do not honor our veterans!” When really we know that it is because their sign of protest during an event that usually helps us to feel proud and superior is instead waking us up to our place of privilege in this country and forces us to come down off our fictional pedestal and face the realities of a status quo from which we just want to benefit.

I cannot speak to the realities of persons of color because I am a white male who only benefits from this system. But I can say that there is something wrong about the fact that Colin Kaepernick has not been signed on an NFL team even though his production as a QB has been superior to most back-ups and starters during the same time period of play. [viii] And the only reason that seems to be the case is because he is a person of color who has disrupted the status quo by taking a knee during the national anthem.

If we truly believe that the system that we are in is perfect and can in no way change for the better, than we are truly delusional. Education and healthcare are crippled by lack of resources. Correctional facilities are privatized and operating in ways in which it is more profitable to keep them overly full than seeking to be rehabilitative.

If we really thought that the system was perfect, then we wouldn’t go to war every four years to elect a new president who promises to repeal everything put in place by the previous administration.

Martin Luther protested a system that was crippling those who were already oppressed because it only benefited those already in power. And he did so by trying to start a conversation. And the conversation was provocative and filled with words that were ruthless and sometimes violent (see the theses referenced above).  And this started the “Protest”-ant Reformation.

The NFL players that took a knee this past Sunday are not un-American or unpatriotic. They are reformers – those who are trying to start a conversation through an action that is provocative and shakes the status quo. But their actions are peaceful and showed unity rather than discord.

If we as the church, the Lutheran and Protestant church, are unable to at least hear the beginning of this conversation, then we don’t deserve to call ourselves Lutheran or the Church.

This issue is not outside the church. It is not a political issue that does not apply to our Gospel. Our neighbors, our siblings in Christ are calling out for us to hear that there is injustice and oppression that exists all around us. We have been told to love our neighbor, and in that love is deep listening and hearing.

The players and coaches’ actions around the NFL this past weekend should wake us up and have us truly listening to what is happening in our country. The Theses have been nailed to Church and it is long past time that we began to really have a conversation around racial justice and privilege.